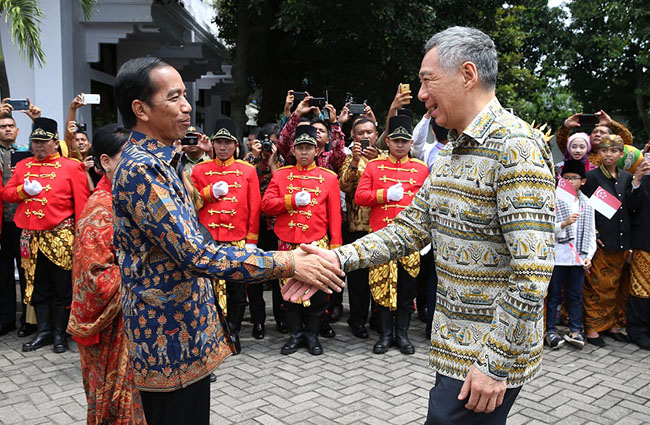 If you are talking about places like Bandung for example, Bandung is a very exciting area as far as it is concern, and the number of the company interested in there. And, we are working closely with the local government on e-government. Which is also something that happening in Makassar. Makassar is very interested in smart city innovation, this is an area where I think our companies can also share some of the expertise. So, there’s a lot of collaboration and cooperation going on in areas in fields as well as the region beyond what we have been doing traditional.

BL: Thank you Mr. Ambassador Anil. Thank you for inviting us, Business Lounge Journal. Singapore for Indonesia is the most important economic partner for now and it’s been 50 years until now. Singapore is the number one investment partner for Indonesia, number 2 in terms of tourism revenue for Indonesia, number 3 in a trading partner relationship, Indonesia and Singapore. How do you see this long-standing partnership will it last for more years to come and do you have any suggestion for strengthening this partnership?

AK: First of all, thank you very much for giving me this opportunity to talk about Singapore and Singapore – Indonesia relation. As you rightly mentioned, Bapak, the Singapore-Indonesia economic relationship is indeed very strong and important one for both countries. If you take just last year statistic for example, Singapore is the top investor in Indonesia. Total investment is about 9.2 billion USD. In terms of tourism flow as well, we are very important tourism partner. For example, tourist from Singapore to Indonesia is about 1.6 million, from Indonesia to Singapore is about 2.9 million. Very impressive number. But it’s a long standing relationship on the economic fund that has been build up even before there has been the independence Singapore and Independence Indonesia. As you may be aware, Bapak, there is a constant review of the economic relationship. There’s a working group process on the Singapore side, chat by our minister of trade, Bapak Lim Hng Kiang and in Indonesia side, Bapak Menko Perekonomian, Darmin Nasution. So, they review the working groups, the areas where there’s economic cooperation and later this year in September, our hope instead Bapak Presiden Jokowi would visit Singapore and during that time, he would meet with Prime Minister Lee and they would then take stock the economic relationship and see what else we can do together. Some exciting areas where there’s a potential to do more is tourism. We talked about a very impressive tourist flow between the two countries. So, cruise tourism is an area where we are looking at quiet closely, Bali, Medan, Semarang, Palembang, …

AK: the some of the cruise tourism destination that Indonesian government wants to develop and numbers of ours companies very interested. Energy sector also is an area of interest to our companies, whether its renewable energy, whether it’s in term of bringing power to remote areas in Indonesia. Our companies believe they have roles to play and I think in you, cost the detail to somebody’s project would come up. So, I am very bullish, I am very confidence, about the prospect of even great economic cooperation between Singapore and Indonesia going forward.

BL: It seems that the Singapore investor now is not only focusing in Jakarta or Java only, how do you see it?

AK: Well, I think for Singapore businesses at least, it is true that a significant part of our investment is in the Jakarta area, Jabodetabek area, but you would know that historically, Singapore for businesses also very active investor in Kepri, in the Riau. And this has been ongoing for long time. And you are absolutely right to say that our investors are now looking at areas beyond the traditional areas where they have an interest. As an example I can highlight what has happened since last year as you’re aware Prime Minister Lee and Presiden Jokowi met in Semarang last year and then also went to Kendal Industrial Park, which is the join project. Between Sembcorp of Singapore, Sebang, and also Jababeka of Indonesia. It is a very exciting project. We expect about 4000 jobs, we created there for start 27 companies have shown interest and you know, I think take of, we are talking about investment something that region close to 400 million USD. So, this is an area where you can see Singapore businesses are moving beyond what they had been traditionally or where they had been traditionally active in. If you are talking about places like Bandung for example, Bandung is a very exciting area as far as IT is concern, and number of company interested in there. And, we are working closely with the local government on e-government. Which is also something that happening in Makassar. Makassar is very interested in smart city innovation, this is an area where I think our companies can also share some of the expertise. So, there’s a lot of collaboration and cooperation going on in areas in fields as well as region beyond what we have been doing traditional.

BL: There is one question about one hot topic just recently about tax amnesty. Now the program has make … from the data, the fund repatriation from Singapore is rank number 1 actually from the tax amnesty. So, is there impacting the bilateral relationship between the two countries? How do you see that?

AK: Well, when it was first announced that Indonesia would be embarking on the tax amnesty, even before the amnesty was implemented, there were some news express that this would create unhappiness with Singapore that the Singapore economic would collapse. And that Singapore will go all out to ensure the tax amnesty failed in Indonesia. One can speculate, why such negative views has been expressed for example we can speculate that maybe one reason for such statement  and such view is that some people in Indonesia may view that they don’t want tax amnesty to succeed. Or they may view that perhaps it may failed therefore it’s better to blame somebody else for it right from the start and find excuse. We can speculate about this things. But I don’t think that it’s particularly helpful to Indonesia or to Singapore. Let’s look at this issue totality. I think it’s entirely within Indonesia’s right to come up with its own tax reforms. And I think Presiden Jokowi and his official has made it very clear that they would like to reform the tax system here, they would like to widen the tax base, because revenue is needed for number of activities here. This is perfectly legitimate. And there’s nothing that Singapore sees as a negative or something to oppose this aspect. Singapore is a blue chip financial center. And so money flowing in and out is part of the cost as fast we are concern. And we are responsible financial center. Which means that we are not in the business of trying to undermined what other doing because as a financial center if you are seen to be engaging in such the negative activity, you will not a blue chip financial center for very much longer. So, absolutely we do not have any concern of problem of what’s going on with the tax amnesty here. On the contrary, for Singapore, it is always important that Indonesia does well and Indonesia succeed, because a successful Indonesia is good for Singapore, is good for the region in create small opportunities for us. So, I would like to assure you as we did, when the tax amnesty kick that Singapore is no way to push to Indonesia’s tax amnesty and in fact Singapore urge the government and the relevant financial authority since Singapore urge our bank to support Indonesian who wants to participate in the tax amnesty. And in fact you were know that 3 Singapore banks among the big banks here are participating or which are participated in the tax amnesty. That would know that’s been possible if Singapore have a negative agenda on this issue. So, let’s assure the cooperation on tax related issues between Singapore and Indonesia remains strong. We have bilateral tax agreement since 1990 and our tax authority since Singapore and Indonesia cooperate bilaterally as well as internationally. So there is absolutely no basis to such negative speculation.

BL: I remember that last year when Prime Minister Lee coming to Kendal Industrial Park. He said if I not mistaken, that it’s a win-win project. If Indonesia is strong, Singapore is also strong.