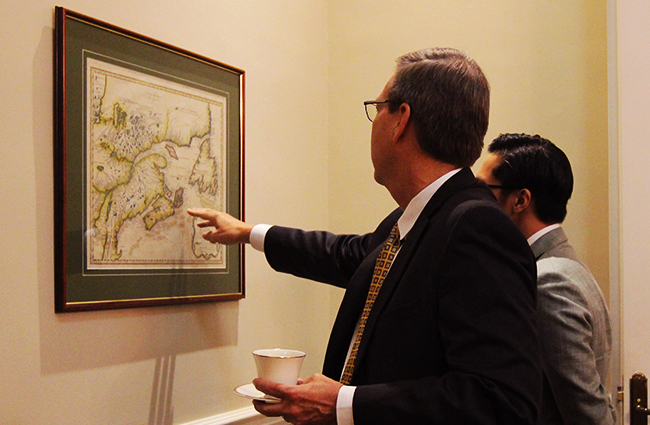 BL: At first, I want to thank you for accepting me and my team here. We are very grateful to be here.

BL: During the period of slowing down global economy nowadays, please tell us how do the Canadian’s business investors, in general, see the South East Asia region and Indonesia particular?

PM: What was interesting is what happening is there’s more … more Canadians who are becoming aware of understanding the rises South East Asia with the Asian economic community coming together. The high growth rate in South East Asia including Indonesia has attracted more … more interest. Typically North American Canadian have been very much focus on China and India, and of course Japan. But the good news is that’s there’s an increasing interest, why? Because it’s a large population over 600 million people residing in South East Asia. Eighty million middle class household. It’s so very high percentage of young people, so there’s demographic dynamic there. And a high growth rate of attracted interest because as the middle class rises the adversity of products that are about more interest. The other things is more … more Indonesian exporters are finding market in Canada and in other part of the world. And indeed there are some Indonesian company that has become investors in Canada. And that’s an interest as well and that’s helps rise the wonderful Indonesia brand shall we say. And I would say the same would apply to Canadian tourists discovering Indonesia and Indonesian student discovering Canada as a place to study. So you know, today in South East Asia, you have people and Asian buying noodles made from Canadian wheat. And they are flying in airplane made in Canada, and the palm oil plantation are being fertilized by Canadian. And you’re going to find Canadian made train until recently on the Malaysian banknote. That banknote is being taken circulation regular flow. But many more middle class Indonesian and citizen in Asean are buying insurance from Canadian life insurance companies. So there’s a greater degree of commercial contact. In high technology the latest development in Indonesia of course has been the BlackBerry device is now being manufactured near Jakarta. The BlackBerry product, which is formerly launch last month here in Jakarta, and it is the most secure Android telephone in the world today. And it is part of a very good arrangement with Tiphone of Indonesia and Emtek, the application site is establishing office in Toronto as part of this arrangement. So even high technology the diversification occurrence, you have Canadian company manufacturing furniture in this country. Solar panel cell for the renewable energy industry, and other equipment. And I must say that I’m pleased as the new ambassador here to see a diversification. Typically over the decade we have many Canadian firm investors in the mining sectors including exploration, and in oil and gas. But increasingly see development in services, there are 20,000 Indonesian, mainly young Indonesian male and female, are currently employed by our 2 major insurance companies. For wealth management and as the middle class grows, there’s a great era desire to risk management. I think that’s positive thing also. So, there has been slowdown globally but relatively speaking at 5.02% growth Indonesia really stands out in G20 economy at the heart of Asean.

Currently, Asean we have about 20 billion dollars trade turn over Canada-Asean. We have about 10 billion dollars of Canadian investment in the Asean region. And Asean has about a billion dollars invest in Canada and that’s rising. And specific oil and gas of Indonesia is also working on energy project on North of Vancouver on Pasific coast. These are very good signs of greater economic dynamism. So despite the lower commodity prices, the slowing down globally of trade and economic development although you have seen enough thicken in recent months, we are very optimistic that we can grow the business. And many much of that business will involve small and medium size enterprises. And we’re looking for the new, young entrepreneur in our crowd. The new generation to come forward and do more startup jointly. Young Indonesian and young Canadian working together. Wishing more and more on that. We positive of that.

BL: What kind of startup that you hope to see?

PM: The kind of startup we like to see would be largely internet apps. Canadian are discovering that market like Indonesia, are more cost effective places to test ideas. As you know entrepreneur often fail, that’s part of the recipe and the magic sauce. To fail in the UK or the US is much more expensive than fail in India or Indonesia. And, you know there are some very interesting apps that are home grown here in Indonesia. And that is a reflection of young talent. There’s a recent survey that show that Toronto is one of the leading entrepreneurial and high tech city of the world, ahead of Singapore, in term of ranking by respective US organization. I was director general for Asean and South Asian before coming here. I hand picked Jakarta because I think as a G20 economy it has a very high prospects. And increasing interest in Canada discovering Indonesia, which I think it’s the most interesting country that well known enough in Canada, quite frankly.

BL: From the latest data of the Indonesia Investment Promotion Centre (IIPC), or BKPM in our Bahasa, we see Canada is in no. 23rd in terms of countries with investment realization during the year of 2016, with US$99.8 million of investment value and 81 projects. Do you see the opportunities to increase Canada investment in Indonesia in this year forward?

PM: You know, Canada is a very open and adverse country. Prime Minister Trudeau has made a very clear globally in G20 meetings, APEC meetings, that we are open for business and we do believe that the possibility to do more very much there. We are a quiet diverse country. Half of the population in Toronto, our largest city was born outside Canada. And by attracting qualified carefully selected immigrants about 300,000 per year just under 1% of our population, we are attracting entrepreneurs. So, our best entrepreneurs including the founder of BlackBerry who is an entrepreneur immigrant from Turkey.

We have strong government support in Canada for infrastructure development very much oriented to building up our universities and our research institutes. And we also very interesting cost of excellent for life sciences bio technology, robotics, artificial intelligence vintech, are these emerging areas if you look at recent headline out of Canada the Trudeau government is investing covertly in the new economy, the internet of things. And we do hope that more Indonesian and other business people within the ASEAN region connect with us and places like Vancouver, Calgary, Toronto, Montreal, Halifax where much of the city. I must say that you know, there has been bad news about you know free trader around the world in recent month, but the good news is not enough people are focusing and I believe is that Canada and the European Union recently signed and are gratifying so the European Union parliament and our parliament gratified a free trader agreements, which will is very ambitious and very advance. And, so any Indonesian company that was to do with Canada is dealing with the country that has freedom access to the US, to Mexico, and to the European Union on top of other country with it we have free trading it was including Korea. And many countries in South America such us Colombia, Peru, and others.

We are very open market. So if you are going into a stores in Canada today, more and more of the short and the apparel which used to made in China, made in Vietnam, more and more is made in Indonesia. Same can be said for footwear, same can be said for agriculture product, your export of agriculture product are up 50% in recent years. This include coffee, your wonderful coffee, which I very much enjoy it here. One of the many positive occurring in Indonesia, Toraja and other coffees.

Canada has been a long term partner with Indonesia since the 1950s where we first help the United Nation agree to admit Indonesia as a member state. And since the 1950s we have a very strong development program here. Increasingly is aim that sustainable economic growth for Indonesia. So we have we’re spending million of dollars with ministry of trade to upgrade the abilities and accountabilities of trade officials, and exporters – young exporters.

Another one is to help the ministry of finance government of Indonesia to established a frame work to track foreign and domestic private sector investment and public private partnership for infrastructure development.

And so with the finance  we are making a steady progress including with the World Bank to help Indonesia make that leap to mobilized a lot of capital. You know, just last month to visit us that Canadian pension fund are investing in Indonesia. But hasn’t happened very much in the past.