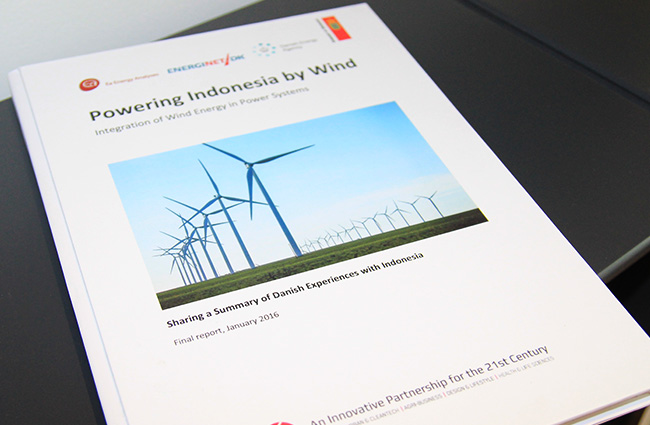 [alert type=white ]I pull out of the map that we paid for as part of our development cooperation which is a wind map of all of Indonesia. And it shows exactly where the wind is strong and where you have enormous potential for wind energy… South Sulawesi is one example. The southern part of Java, the southern part of Sumatera, Nusa Tenggara and many places, even in Papua where the wind is fantastic, and we host a huge potential for bringing the new local clean energy into Indonesia.[/alert]

BL: It seems that the Denmark’s economy has been relatively sluggish since the financial crisis of 2008. The export performance has also been hit by ebbing demand in the county’s main European market (Source: WSJ, Aug. 31, 2016). How do you see the outlook for Denmark’s economy in this year? If the economic pressures continue, do you think these could affect the high living standard, and then the top happiness index in the world as it used to be entitled to your country?

CK: You know we would love to trade our growth rate with the growth rate of Indonesia, you know with 5% growth rate. It seems so almost impossible for us to reach. But it is true our economy has not grown with the same level as we seen in the past decades. I think the numbers reason for autonomy more competitive global market and perhaps, you know, additional constraining time on the economy at home also after the financial crisis. And I think these days we optimistic that it’s going the right direction. We have record low on employment. And the economy is beginning to pick up pace. But I think also in, you know, 2017 is important to be realistic but, you know, we might not see the high growth rate that we’ve seen in the past. I think those growth rates approaching double digit is primarily reserved for growth country like Indonesia other countries around the world which is many picking of pace and think huge development in health growth potential. And that’s, of course, one of the reasons why we enormously ambitious in building a strong partnership with Indonesia. And one of the reasons why here in the embassy we work 24/7 on promoting investment and business opportunities because we think it’s a mutually beneficial situation what we can help Indonesia saw some of the challenges on growth, on environment issue on energy. And at the same time, you know, get some good growth rate into business in through investment fund. So I’m optimistic and I think the economy is looking stronger today in Denmark than it has for so many years. But realistically we also have to get used to perhaps some more modest growth pace that we have in the past. You mention whether this is threatening the welfare state and some other services that we have. And honestly, I think the answer yes, there is a constant challenge to make sure that the budget or the economy of Denmark is strong enough to support those welfare services, education, healthcare, etc. And it is about time the system where it doesn’t take too much crisis to fit our ability to deliver everything we do. And then we also have to remember that the demographic development also means that we’re giving the more elderly population which beginning increases the amount in the health care sector and public spending. So you know there are many things that contribute to some of the differences with the economy.

BL: Denmark has helped Indonesia more regarding certain sector such as a maritime, pharmacy, and energy, we have discussed about energy. However, it seems that Denmark’s investment level here is not as strong as other European countries, such as Switzerland, Luxemburg, and Belgium, according to our latest data in BKPM. Could you please tell us, is there any programs this year that could strengthen the investment in Indonesia?

CK: Again the honest in saying I’m not satisfied with where we are right now, with our trade between Indonesia and Denmark. I mean despite being the world 4th largest country you only have 57 export destination 4 for Denmark. And it goes without saying that the potential is much, much greater than that. So that’s what we working on with the business community to try change every day. And at the same time, we are already present here and I can give you a couple of example of companies that are had made the quite significant investment. So one of the companies that are on the table here on those lines, you know, the world leader in shipping and logistic. They’ve been here since the 1920s.

CK: In fact, you know, one of the first ship that brought coffee from Sumatera to New York was under the ship back in the 1920s. And still today they hoping on connectivity in many and making if possible Indonesia product to reach the global market, whether we talk coffee, cocoa, coconut products, or other commodities. So that’s the company that we through very large turn around him. Another company would be ISS, the facility service provider. And many people don’t know that but the thing company with more than 60,000 employees. But it is not the easiest market to enter, unfortunately. So many of the company experience difficulties one kind or another. And that’s what we’re working also with Indonesia Government on trying to help the investment process that can growth the economy.

I think one of the areas where we working very closely with Indonesia right now is on waste management. And, you know, one of the quick thing that’s proceeding here in Indonesia of course that you can visit some of the many islands that you have. And I really love them and I trying travel as much as I can. But of course, you also see the flip side of development which is a lot of waste problem even in remote areas. And I think that’s something that the President Jokowi’s government is now beginning to address in the most system ethically and this week I had a meeting with the coordinating minister of commerce some affair Pak Luhut. And I think he’s showing real leadership out of the acknowledgment that you have to do something about the waste problem. But for the environmental reason, for tourism reason, because if tourist swims around and you get waste on new they probably not come back to Indonesia after that. But also just to growth the economy and make sure we don’t contribute to global pollution. So I think that kind of leadership can make a real change for any country whether it’s the newest European countries or South East Asian countries including Indonesia.

BL: Do you have any take on sustainable energy?

CK: It’s one of the flagships in our bilateral relationship with Indonesia. So we put a lot of resources into that. We have our development program here for many years focusing on sustainable energy. And lately, we have the energy expert sitting here at the embassy who’s working with the Indonesian government to promote sustainable energy. And now our aviation for that partnership is that we think we can help Indonesia increase the amount of the renewable energy in the energy portfolio. And one example where we have very strong on wind energy. And I very often here when I meet with minister or decision maker that you have no wind in Indonesia. And there for the wind has no future and what I happened is that I pull out of the map that we paid for as part of our development cooperation which is a wind map of all of Indonesia. And it shows exactly where the wind is strong and where you have enormous potential for wind energy.

BL: Where is the location?

CK: Well it’s many different places. South Sulawesi is one example. The southern part of Java, the southern part of Sumatera, you know, Nusa Tenggara and many places, even in Papua where the wind is fantastic, and we host a huge potential for bringing the new local clean energy into Indonesia. That would benefit both economic growths but it will also benefit you and me in the sense that pollution would go down and health care problem would reduce the same some source. Really win-win opportunity.

It’s easier to recycle a solar panel than it is to recycle oil or coal once it’s being burn. And the interesting thing that solar panels and I don’t know if you know this, but every 22 months the productivity is double on the solar panel right now. So you have the exponential development of solar panels. So in another word, it’s becoming cheaper and cheaper and more and more efficient. So I think we can probably make a small bet the two of us but I think what we will see of revolution in any put option. Where renewable energy would become much cheaper thanks to technology development. And it will edgily up complete fossil fuels in a very, very short time span. And I could easily envisage the world where energy is not in shortage. But we have surplus production of energy. And that could be turned into all sort of productive thing that will increase development healthcare, education, etc. So I think that’s the kind of technology evolution that we’re looking at over the next year.

BL: So what’s the biggest source of renewable energy in Denmark?

CK: That’s wind energy. Because as I mention before when I happy because of the weather and they want another think we have plenty of is wind. And very often quite cold and always in the one direction when you biking to work in Copenhagen or in some of the other city. So today in the beginning 2017, 43% of our energy production from wind energy. So 43% almost half of our energy production and on good days, on bad days depending what you doing where the wind is strong actually more than 100% for our energy production comes from the wind, which means that we have a surplus production and we exported to our neighboring countries. So wind is fantastic and in fact, we have a vision to completely get rid of fossil fuels by the year 2050. In another word in 2050, we would become completely green, completely renewable.