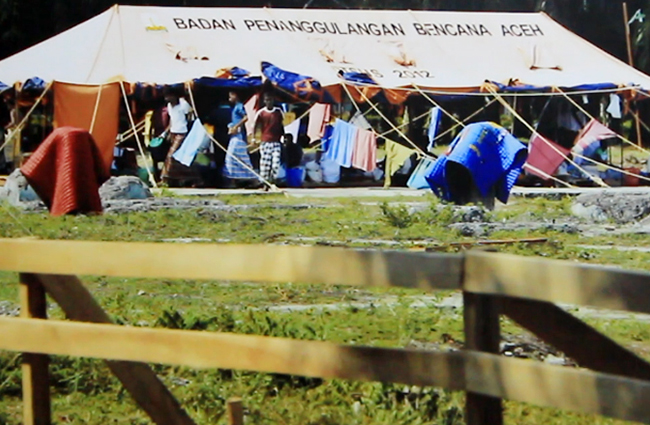 the financial contribution to UNHCR by allowing their borders to remain open,

to genuine refugees who are fleeing for their lives. And to make sure that people have a safe place

until wars can stop and everyone can go home and have a normal life again. That’s what all of us deserve.

TV: Well as we’ve already said the world is facing a global refugee crisis like nothing we’ve seen since World War II. UNHCR and other agencies, we all depend on countries pitching in and sharing the responsibility of helping people in need, like refugees. So it’s very important for governments to provide contributions. We’re facing not only a global refugee crisis because there’s so many refugees and others who are displaced from their homes by force, but also because we have not enough money to address all of their needs. So the world has to come together, countries have to come together, and pitch in different ways by making financial contribution to UNHCR by allowing their borders to remain open, to genuine refugees who are fleeing for their lives. And to make sure that people have a safe place until wars can stop and everyone can go home, and have a normal life again. That’s what all of us deserve.

Refugees usually flee to the country that’s closest, where they can find safety. So more often than not the bordering countries to countries where there are wars are the ones that get the most refugees. And that’s why it’s so important for countries around the world to share the responsibility. So it’s just not Lebanon for instance is just across the border from Syria, or Turkey  for instance was facing– who has right now over two million refugees within its borders. And at the same time is generous enough to allow those refugees to be safe in their country, because they know what’s going on across the border.

So it’s very important for countries around the world to share that responsibility and not just a handful of countries carry the brunt of helping others in need. So that’s why I say there’s a lot of different ways to do that. Countries can provide, can reach out, and agreed to take in refugees, they can provide contributions, they can promote peace. There’s a lot of different ways that you can share the responsibility. But it’s pretty clear that not one country can do it alone. There is all not just a handful of countries can do it alone. It takes contributions from everyone, financial contributions as well as contributing to world peace, providing opportunities for refugees that they may take from another country that– so there’s all sorts of arrangements. But what’s important is that countries come together and share the responsibility. People who are refugees are people who have forcibly they’ve had no choice but to flee their country, to escape what’s been going on there to another country. And they’re usually five different reasons why someone becomes refugee and was not safe in the country. That’s either because of a political opinion, because of the religion, because of their race or nationality, or membership in a social group, those are all the elements that make up a refugee definition. And basically when someone crosses the border and they have had those types of problems that force them to flee to safety, the host government will agree to take them and will allow them to stay. And those systems are in place to help identify who is a refugee and make sure that they meet the definition that found in international law. And that’s why you will often hear how long a process it is. People who are refugees are people who meet this definition and who have been vetted and who have been confirmed that the stories that they’re looking for safety somewhere else are justified the real stories–

BLJ: Each country has their own vetting system.

TV: Well, a country like Indonesia for instance, it doesn’t have a system in placed. So it asked UNHCR to play that role. So people come who want to apply for asylum to our office and we talked to them and we find out what caused them to leave their countries, and we will see if indeed they are refugees. But it’s a vetting process and that it’s a very long process that  they go through. And then if they are refugees of course we’re very grateful that the government of Indonesia allows them to stay until longer-term solutions can be found.

TV: If you’re a refugee, your refugee, means that you were forced out of your country for one of several reasons and you need a safe place to be. How you got to that country, where you have safety now, it’s not a question of whether it was legal or illegal. The Refugee Convention says if someone is a refugee, you should help them. It doesn’t matter how they got there or what means they took. Sometimes refugees, you know, you can imagine in a wartime situation you don’t have a the time or the luxury to request the visa for the country you want to visit. You just take your family, you gather whatever you can and you run for your life. That’s basically what– You’re not looking for a visa or passport, or any– you’re just looking to find the fastest way to safety. So that’s why international law does not dictate how a refugee can flee to safety. The whole principle of refugee law is helping people save their lives basically. So the whole framework doesn’t talk in terms of legal and illegal. It talks in terms of saving someone and helping them.