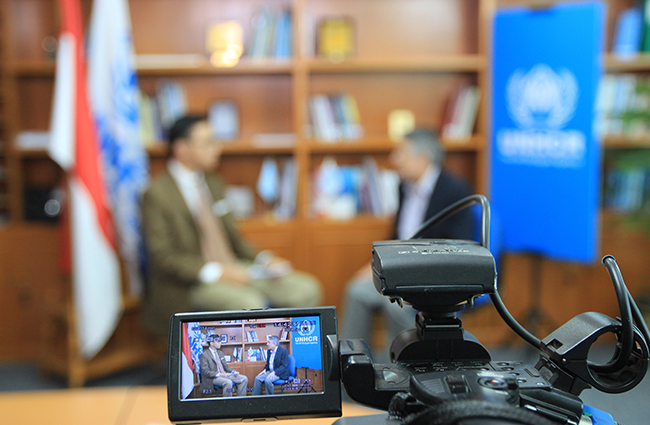 Foreign Insight: Refugees and their Yearning

TV: You know Michael, it’s an interesting to hear these types of misconceptions because the refugees that I know are some of the most productive, resourceful, amazing people I’ve ever met. When you think about who’s been a refuge in the past and how it would have been different the history of the world literally if refugees weren’t welcome to other countries. One who comes to my mind is Albert Einstein who fled himself to safety as a refugee. Can you imagine what the world would be like if we did not have Albert Einstein in our past and to have helped humanity the way he has?

TV: Well until the war’s end, until the atrocities can stop, people need a safe place to be. So our appeal is for countries to continue to keep an open heart, keep an open border to refugees, and allow them to have a safe place with their families until the problems of war and the human rights violations can be resolved. So that’s very important.

As I said you know, you and I, and our families, we would– If we were in danger, I’m not talking about just -you know- a daily situation that happens to occur, I’m talking about all-out war that is causing famine and causing destruction, and causing the entire social fabric of the country to break down. You and I, if we were faced with that kind of problem, we would want someone to lend a helping hand. And that’s what countries have to remember about refugees. It’s not about closing borders, it’s about opening your heart, and helping someone in need.

BL: What do you think about the safety of this country?

TV: The safety of Indonesia?

TV: Well Indonesia, first of all, we’re very grateful to the Indonesian people for providing a safe place for refugees who are being hosted here. Secondly, Indonesia I think is an example for many other countries in the world to follow. As I mentioned before, it’s a diverse country with so many different ethnic groups, hundreds of languages spoken, an archipelago nation made up of what’s over 17,000 islands. And yet the country has managed to stay together in one united way, united by one language, united by the five principles of Pancasila. So many great elements to keeping the country together that I think can be an inspiration for many other countries to follow. And hopefully, if other countries can ascribe to that kind of rich tradition of diversity and tolerance, we wouldn’t be talking about refugees and the global refugee crisis that we see today.

BJ: I do have refugee friend from Iran. Her family got stranded here for years and like you said they actually really kind and hardworking too. They are escaping from some persecution back home. Yes, she actually loves Iran more than the new country. It’s true. I can imagine myself, I mean if something going on in Indonesia right now and I have to resettle let say to America, or France, or the UK, I think I would miss this country a lot. I just miss the ocean, the padi field, food, people.

TV: Food is a big thing. I know people will miss the food.

BL: Here, they are trying so much to find any ingredients that closest to what they have in Iran. Most of them can be found because Indonesian food can also comparable with Iranian food but one ingredient called saffron, she can’t get it here. So, she has to got delivered from Iran to here.

TV: It’s interesting how you– whoever you grew up, and whatever was around you that helped form you as a person is something that you’ll never forget. And you’ll never stop craving for anything, so and it’s the same for all of us. I have my own special ingredients in the food back home that I miss very much.

BLJ: Where do you come from?

TV: From the US, but my family is Mexican and Spanish so we have a rich cuisine as well.