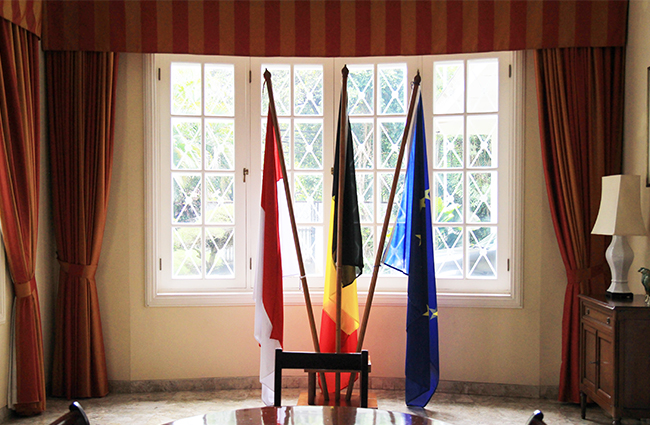 Foreign Insight: Europe today and the threat of tomorrow

With the increased tension in eastern Europe, Belgium has to be ready for any threat that may come to their doorstep.

Besides that, there’re also the refugee crisis that will not be resolved soon.

So we ask the ambassador, what is going on in Belgium and Europe right now?

HE: Yeah. Of course it’s– the confuse time and the dangerous time. So I think they are also an important moment in the history of Europe having to think and re-think partly how it is going to defend itself and its interest over the next decade. This being said NATO remain of course the basis, the very foundation of European defense. As you know there have been changes in the United States. All European countries and especially EU countries and NATO countries are concern with the number of sign that have been received on the way the new administration appreciate the European Union as an integration effort and the way also the US sees it’s own role in NATO in the coming years and decades. Knowing of course that the US as since the second world war and since the creation of NATO a few years later being the heart of NATO, the strongest military in NATO. And of course distribute power that has been, that has been guaranteeing and preserving the interest and peace in Europe which European countries have enormously appreciate it since it’s 1940 and continue.

For the next few weeks and few months we do hope that the flaring up of attacks coming from rebel forces in Eastern Ukraine when they going to be a temporary phenomenon. But we concern about it. We do think that the use of heavy weaponry in Eastern Ukraine goes against the agreement amendments. And we do want the agreement to be respected. And we do hope that the peace will come back and that we will have a long term solution being found between the different parties in the Ukraine and the Ukraine not become a frozen conflict. For Brexit which has of course security implication but most of all economic implication and financial implication in Europe. BL: How much the Brexit have impacted the rest western Europe?

PH: The effect is going to be very large and certainly going to be very large for Belgium because the UK is a major popular economically and its fast investment is concern. So it will be a large impact but it will be an impact that definitely our economies in the EU and the Belgium economy are going to be facing successfully. The political impact and coming back probably to my example a few minute ago the European Union has never been as active and it’s never evolve as much as during crisis. We have that impression suddenly that we’re in 2016 and Europe has been going through since 1945 a very quite period with no crisis, with no tension, with no conflict. This is not true. We’ve been through out the 1950s where frightening ages, the 1960s where food of crisis in Europe especially with between France and the UK about the European Union and enlargement to the UK. Already in the 70s around NATO which also expand wider the NATO is now in Brussels. So and I think Europe has been striving undo it’s crisis.

I’m definitely very concern about the rise of populism not in the US, but also in part of Asia and central and eastern Europe and in western Europe. I don’t think we should reduce the rise of populism to only to the refugee crisis. I think we have been at the receiving and a perfect storm in a way first of all economically. The crisis of 2008 is still more less that– in Belgium economy, Belgium economy has been doing pretty well, has been growing steadily if not as fast as Indonesia for the past few years and creating quite, quite a lot of job.

And– but it wasn’t the case of all countries in and around Europe. Because we are coming also through a 4th industrial revolution. We are going through an industrial revolution where the people are less needed. And where people even if we create jobs those jobs are changing the people, the manner people relate to that job, relate to society has been changed. Of course part of that revolution is to social media, that are no only change the way we work and the way we see our job. But also the way we communicate and the way we can be sensitive to hate speech maybe easier than we were before the explosion of the social media. And the refugee crisis not or no eastern neighborhood but you know sudden and south eastern neighborhood has been arriving at that very moment. So we have a social crisis, a structural crisis in our economies and in our societies that are found in the arrival of migrants and refugees, a focus. Unfortunately very often it’s very misguided focus but that we have to accept it. So perfect storm it was having a large wave arriving at the moment where our economy were in– we’re going through a probably an earthquake. That’s the magnitude of event that you can imagine there was the economic earthquake and the immigration wave arriving at the certain moment. And probably arriving at the moment which is also the case in most natural catastrophes where the authorities where the nation were not expecting it. And I think we didn’t see the signs arriving what we call the elite, the government, the ruling classes, whatever the populist call it. The people who are running the economy, running the government, running the academic circle, didn’t probably see that anger, that resentment coming from inside entity arriving. So all the appearances of an economic and social earthquake and tsunami, this being said as far as we are concern the policy isn’t going to change certainly bounce must been one of the founders of the league of nation and the United Nations. We have been pushing very much to have the whole legal arsenal, the whole legal structure we develop within the United Nations, within the European Union, within the council of Europe to protect refugees, to protect human right, to protect minorities.