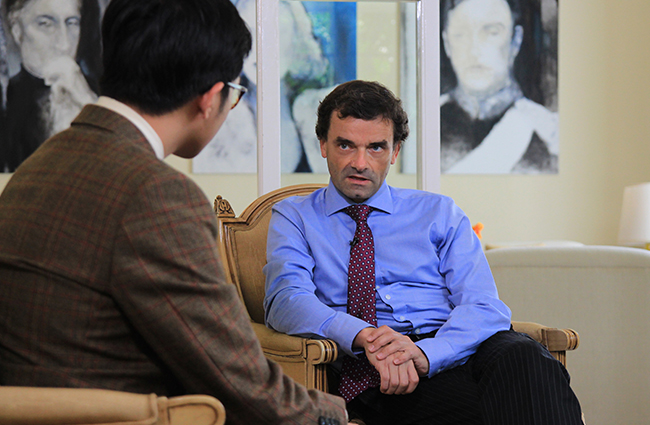 BL: Mr. Ambassador and Ms. Nathalie thank you for having me here. It’s been a pleasure. My first question will be about our bilateral economic relationship within Belgium and Indonesia. So, in the economic partnership, from the latest data of Indonesia Investment Promotion Centre (IIPC), or BKPM in our Bahasa, Belgium investors have already realized of US$169.7 million investment in Indonesia along the year of 2016, consists of around 118 projects. Please kindly inform us, what are the most promising sectors for investment the Belgium see and why?

NS: Well, I think the investment here reflected a bit of what Belgium has to offer as well. We see a lot of diversity. Because Belgium is made of a lot of small and medium size companies, very focus on certain specific sectors or specific products and services. So that make them although they’re not huge they’re still can work worldwide. And when I look at the investment that’s definitely a reflection. It goes from companies in the food industry, companies in the furniture, companies in the construction sector. But there are couple sectors that we really have been focusing on the last couple of years. One of them is everything that has to do with maritime infrastructure. We have great a few of bigger companies that are active in the construction of ports, developing artistic and infrastructure and that’s definitely also one of the priorities for Indonesia so there’s definitely very good match. We also have little companies in agriculture, biotech, the more advance development of certain agriculture products or services. So that’s, what is reflected in the current trend of investment.

BL: Please kindly inform us, how do the business people in Belgium seeing the Indonesian economic potentials?

NS: Indonesia is not always the easiest country to work in. Although there has been the tremendous effort to improve that and like it was revealed recently Indonesia was one of the fastest improving countries in term of ease of doing business in the world. So I think Indonesia jump about 15 places in 1-year loan so that shows that economic stimulation packages are definitely having their effect. And that I think is what have has attracted also. A lot of companies do finally come to Indonesia and invest here.

BL: What are the difficulties that the investor mostly faces in Indonesia?

NS: I think it’s still paperwork, the red tape, the bureaucracy to deal with. It’s challenging because it’s totally different environment. It’s often where do we start and even where do we end it’s there’s always new things coming up and so on.

NS: Well I think one of the reason is also as you might know last year we had a very big trade mission coming to Indonesia. We had our Princess Astrid who had the trade mission of more than 300 delegates. And for a country like Belgium, this is huge. I shipping huge for you. I think we were the largest ever trade mission from Europe coming to Indonesia. So, of course, it has put a lot of emphasis on Indonesia. A lot of intention. And although some of the companies were already working in Indonesia, this really give momentum and it brought Indonesia in a very good focus and they like where companies at we have to be in Indonesia. And I think some of the value or the numbers that we see definitely is the resolve of that mission.

BL: What do you see about the future between our two countries, Belgium – Indonesia, in term of investment?

NS: I think it will definitely increase. Especially if Indonesia continue on the same path of the economic reform and openness and transparency. I think there’s so much potential. And there so much both countries can contribute to each other. Because I always think the trade is not a one-way business, it’s a two-way business. One benefit for one country also benefits for the other country because the economy is also global. It is important that you both win from this situation. And I see the future quite bright for Indonesia and the relationship of Belgium companies with Indonesia as well.

Trade is always two ways. Belgium always has been famous also for garment, for fabrics. Already from the middle age or so we had Flemish tapestries. Today we have the Antwerp fashion scene. So textile is still very important. So as it as two-way street we’ll also source a lot from among others Indonesia. And Belgium also has for logistics. So a lot of bigger textile companies. Companies like Nike they have set up their logistic centers in Belgium. That’s also why a lot of items are imported in Belgium but maybe a lot of them are re-export to other countries in the European union. That’s because Belgium is so central and so efficient for logistics that a lot of companies choose Belgium as their headquarter for European.

BL: Can you give us a little bit clue about how the young entrepreneurship was seen is going on in Belgium right now for millennial also?

MS: Well actually I was reading that for the last year we have had highest of numbers of new entrepreneurs in Belgium ever. So I think it’s real–. Its something that already in the blood of many Belgium and to own their own business. But I think it also in their blood to make a good product or good services. I think for most important think is quality. And they will always focus on quality before quantity. So if you prefer to be a small company that making the best possible quality of giving the best possible service rather than having a midi growth figure of 100% or whatever, they want to focus on what the product is. I think that is the strength of the Belgium entrepreneur. They will always be faithful to their products. And not at any possible to grow rapidly.